In the world of hot tubs and spas, the name Jacuzzi is often mistakenly considered synonymous with all hot tubs. In many cases, people don’t actually realize that the name Jacuzzi doesn’t apply to every jetted tub or every spa. In recent travels, an overheard conversation in an elevator highlighted this issue when a couple discussed whether or not they should take a look at the hotel “Jacuzzi.”

Jacuzzi is actually a brand of hot tubs/spas. This means that while all Jacuzzis are spas, not all hot tubs or spas are made and sold by the Jacuzzi company. For the purpose of this article, let’s dive into the comparison of Bullfrog Spas Brand versus Jacuzzi brand, how they’re different, and why those differences matter when you’re making a decision about purchasing one or the other.

Hydrotherapy has been around for ages, dating back to the Romans, who utilized hot springs and bathhouses as early as 737 AD. Clearly, the benefits of hydro massage are ancient knowledge that has been passed down for millennia and that still proves highly effective. So, no one person, company, or idea can claim to have invented it.

However, the Jacuzzi brothers did take it up a notch and invent the first submersible pump, from which modern-day spas have since evolved. That original pump was invented in 1956. One of the brothers had a toddler who developed Rheumatoid Arthritis, and the original pump was intended to give him some relief. In 1967, the Jacuzzi brothers released the world’s first integrated whirlpool bath.

One of the main reasons people get confused about the name Jacuzzi is because they’ve been around for such a long time and because Jacuzzi was one of the first hot tub brands to be sold commercially.

In 1989, David Ludlow, the son of a pool builder, acting as his company’s sole hot tub service technician, found himself running ragged as he tried to keep up with leaks and malfunctions in the spas his company had sold. In working with hot tubs all day, every day, he imagined a spa with modular jetted seatbacks that would contain the bulk of the hot tub’s plumbing within one unit, which would mean that a small leak or malfunction would become an easy fix, rather than extensive, costly repair for every issue that arose.

This idea of his eventually became the JetPak, and in 1996, with the design patent in hand, Bullfrog Spas LC International was born. Since then, Bullfrog Spas has remained at the forefront of hot tub technology, expanding worldwide and continuing to revolutionize the spa industry. Obviously, the Jacuzzi company knows hot tubs. They’ve been building them longer than any company on the market, and they continue to build them well. They feature a patented system they call Aqualibrium®, which includes a specific formula for jet placement, ergonomic seat design, adjustable jet intensities, buoyancy, and heat temperatures that combine to give users a unique hot tub experience.

In addition to this, they offer patented water care technology that includes antimicrobial lines, and an auto-dri™ system that helps eliminate remaining water from airways. High-tech all around.

Bullfrog Spas offers the patented JetPak Therapy System™, which, as mentioned in the history section, is basically a system of self-integrated JetPaks that each contain their own plumbing, which significantly cuts back on potential leaks and other costly repair issues. In addition to the plumbing benefits, this allows each JetPak to be designed with different placement and types of jets, as well as options for massage types and intensities. So, in addition to extra reliability, most Bullfrog Spas can be personalized to individual needs.

Bullfrog Spas also includes multi-faceted water care options that include the FROG® @Ease® for Bullfrog Spas mineral water filtration system, which includes self-regulated SmartChlor® technology that uses up to 75% less chlorine than conventional spas. In addition to this, Bullfrog Spas offers the EOS™ O3 Enhanced Ozone System, which is an automatic water purification system that uses the properties of O3 gas.

And then there’s the Wellspring Filtration Pump, which keeps your water cleaner, while using 60% less energy than conventional filtration pumps. 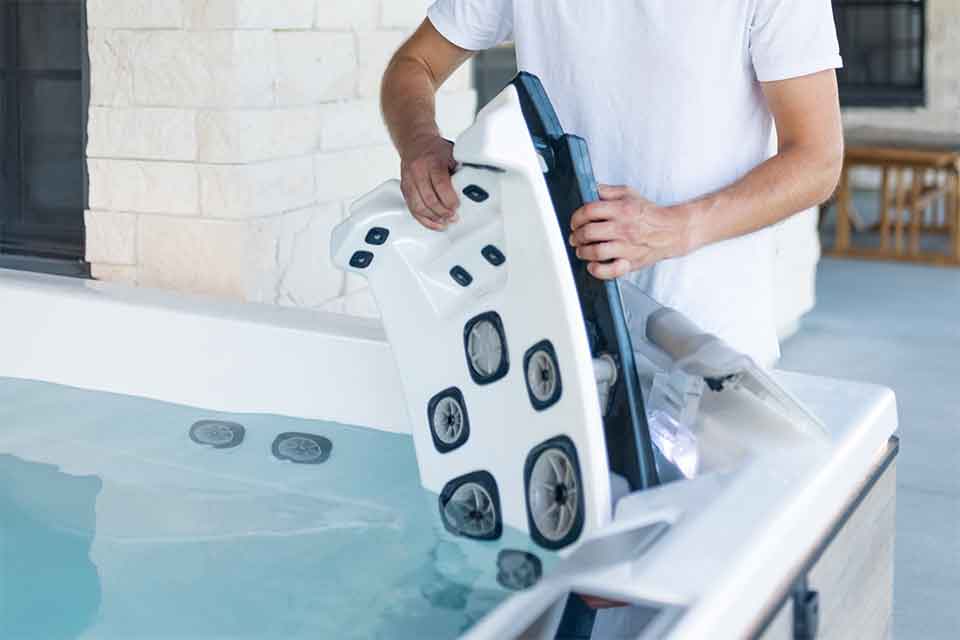 Jets and therapy is the area where you’ll find the biggest differences between the two brands.

Jacuzzi focuses on using the right jets in the right places. Their website, jacuzzi.com, states, “From the perfect mix of air and water to the careful placement of each exclusive jet on ergonomic seats, we deliver the optimal massage.”

Bullfrog Spas takes a similar idea several steps further and allows each individual person to choose from eighteen different JetPak options, which can be placed in a number of seating options throughout their Bullfrog Spa. As the person’s needs change, so can the JetPaks be moved, upgraded, and swapped around.

For instance, let’s say someone purchases their spa to help with stress relief and chooses their JetPaks to focus on shoulder massage. But then they get injured at work, and now they need a massage that focuses on their lower back muscles. It’s now possible for them to get a JetPak specifically for that area and put it in their favorite seat in the spa they already own.

And because the JetPak Therapy System technology is patented by Bullfrog Spas, this level of personalization is only available in spas made and sold by them. 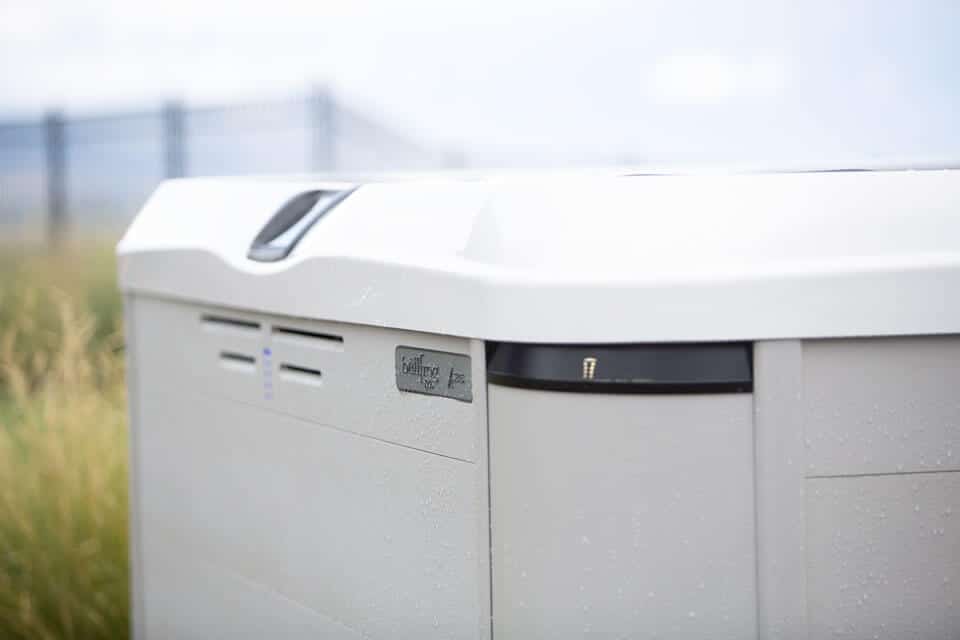 Considering the fact that Jacuzzi has been around since the early days of commercial hot tub sales, they have obviously put a lot of time and effort into perfecting the quality and reliability of their spas. In looking for what makes their product different from others on the market, their website states, “Constructed well, resulting in quiet operation and a long-lasting product,” and, “Proven designs and advanced engineering integrated inside and out for ease of use, longevity, and the best experience.” What this tells us is that Jacuzzi is still building their spas using old-school techniques and systems, and since they don’t specify otherwise, they are still constructing frames primarily from wood, which has a tendency to deteriorate over time.

Bullfrog Spas gives customers a more transparent buying experience by offering full-length website explanations (including photos) of each section of the spa, from start to finish. You can see the 3D rendering of an EnduraFrame and EnduraBase, then move on to see the shell, the spa plumbing, the insulation, and cabinet construction. Bullfrog Spas gives customers a detailed rundown of every portion of the hot tub they are purchasing and WHY it’s high quality. Why it’s reliable.

This is important information that’s clear, concise, and up front about their product. 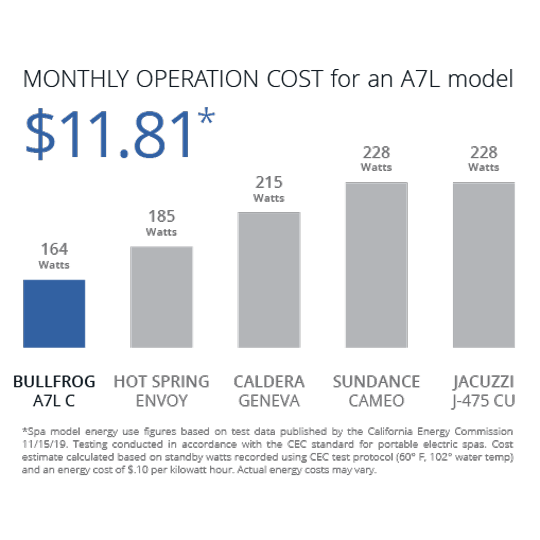 Jacuzzi has vowed to procure 25% of their company’s electricity from renewable sources by 2025, so they’re clearly concerned about energy usage. However, there is really no discussion about the energy efficiency of their spas, except in the product descriptions of two of their smallest models.

This is one of the areas where Bullfrog Spas has stayed ahead of the curve since that’s been a major selling point of the JetPak Therapy System. Data shows that Bullfrog Spa models are the most energy-efficient hot tubs in their class, using up to 28% less energy when compared to other leading spa brands.

If you’d like to compare a Jacuzzi Spa side-by-side with a Bullfrog Spa of comparable size and features, you might consider looking at the J-475 versus the Bullfrog Spas A7L model.

Since both brands are similarly priced when you compare spas of similar size and options, it’s probably best for you to visit your local dealers to find out the differences in spa pricing and other additional costs in your area, such as delivery fees and ongoing maintenance. This is an area where both of these luxury brands fall into a similar price category.

When it comes to making a decision on which hot tub is best for you and your needs, it can be a tough call to make. There are some helpful questions you can ask yourself to help distinguish which one might be right for you. Why am I making this purchase? What is the most important purpose for it? What are my must-have features? What are my deal-breakers?

If you know the answers to these questions beforehand, it might help advance your decision-making process as you investigate the brands that are on your radar. Another idea you might consider is to take a look at customer reviews. Who is happy with their purchase and why? Who is unhappy and what is the cause? The best reviews to look at are the ones that fall in the middle. They generally aren’t all positive or all negative, and usually give the best explanation of the reviewer’s experience.

All in all, we hope this information is helpful as you choose your ideal hot tub.

Get an Instant Price Quote on a Bullfrog Spa

Use the online Design Studio tool to choose your spa model, colors, JetPaks, and accessories. You’ll then receive an instant price quote and your local dealer’s contact information.

Bullfrog Spas is a premier brand of personalized premium hot tubs. With proprietary hydromassage technology and an eye for contemporary design, Bullfrog Spas is revolutionizing the concept of the portable hot tub and providing a relaxation experience unlike any other. Discover the award winning spa of the future today.

Sorry, the comment form is closed at this time.