Should I Get a Square, Rectangle, or Round Hot Tub?

The ideal hot tub shape for you is going to depend on a handful of factors, including the space where you intend to place it, the number of people who might be using it at the same time, and other added features that differ from spa type to spa type. So how do you know what shape of hot tub is going to be best for you? Long ago, in the ancient times of modern portable hot tub existence (aka the ‘40s through ‘60s), round-shaped hot tubs were made of whiskey barrels, but round tubs were some of the first portable, self-contained units.

Never mind that they were made of wood or discarded metal, leaked frequently, and presented health hazards that would make modern hot tub users cringe. Back then, sitting in a tub filled with warm or hot water was considered a luxury.

Now, you have options. Many, many great options. And round is only one of the many. Lucky you!

Round hot tubs are a great alternative to more traditional square or rectangular spas because they more easily fit in oddly shaped spaces, are generally lighter, and in some cases, cost less to install. Round is a popular shape in gunite (in-ground) spas because they can be easily integrated into the shape of an in-ground pool with a minimal additional footprint.

In most cases, round hot tubs seat up to five or six people, so they’re great for conversation. 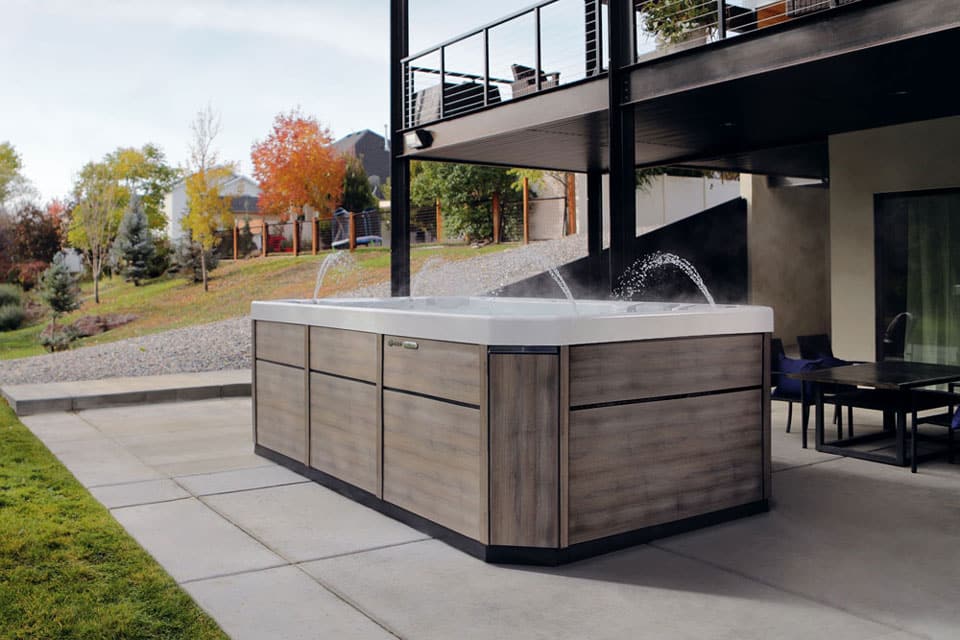 Now, if you want to know about the early, early history of hot tubs, there is evidence that they were used as far back as 2000 BC when the Egyptians loved being clean. They built bathhouses, and the wealthy paid big money (back then) to have rectangular tubs installed in their homes, where it was common for them to bathe as often as four times a day.

Luckily, modern-day cleanliness is much more convenient, and our hot tubs are more often utilized for their therapeutic benefits. Rectangular hot tubs are the most common these days because they offer more space to accommodate multiple people at once without getting too cramped.

Rectangular spas can seat from two up to as many as twelve or thirteen people, depending on which size and model you choose. This is by far the most versatile shape for a spa because you will find that rectangle hot tubs come with a variety of seating layouts and other additional features that can be built into the space allowed by the rectangular shape. Historically speaking, the Japanese have used Ofuro, otherwise known as private wooden soaking tubs, for centuries. These square, wooden tubs are used for meditation and restorative properties—similar to hydrotherapy, only without the jets.

Fun fact. The culturally correct thing to do was to wash themselves before getting into the tub, so that the water could be reused by the rest of the family. The elder family members went first in order to infuse their wisdom into the water so it could be passed down to the younger bathers.

These days, the square hot tub is more of an aesthetic choice. For one, square space delineation does even out how many people are able to sit on each side of the spa. You’ll get four, eight, or twelve people, all facing the opposite side as if seated at a square table. If symmetry is a big deal to you, square might be the way to go because square has a natural, organic look because square has a natural, organic look, and allows the hot tub to fit nicely into any corner.

Native and Early Americans, Romans, Greeks, Egyptians, and Europeans have all considered it a luxury to soak in hot water. The origins of this luxury probably stemmed from natural hot springs around the world that culminated in humans attempting to replicate a similar experience closer to wherever they lived.

Obviously, hot springs aren’t any particular shape. They come in all shapes and sizes, all formed naturally. But in discovering and utilizing these springs, human beings have been attempting to duplicate the benefits since the beginning of time. The benefit of modern times is that you can purchase a hot tub already made, in the size and shape that suits you best. In addition to the shapes we’ve already discussed, you’ll find a plethora of other shape options.

Triangular spas still exist, though are a lot harder to find anymore. The asymmetrical fit can make them tougher to install, and less-likely to hold more than two or three people. The main benefit to this shape is that it can be fit into a corner and take up less space.

Heart-shaped hot tubs also exist. Somewhere. They’ve been spotted by travelers around the world, in hotel rooms, honeymoon locations, and older resorts that haven’t been updated—or which have embraced bygone vintage eras. Popular in the 70’s and 80’s, the heart-shaped spa is not generally made anymore, except, possibly, as a custom option. Perhaps they were considered romantic at the time, but now they’re more of a gimmick for cheesy resort packages.

In 1996, Bullfrog Spas® was born, and personalized spas using JetPak™ technology—and the personalization options it created—became the wave of the future. You can get a Bullfrog spa in a number of shapes, with layouts designed for your ideal size, shape, and number of users. In addition to this, they’re beautiful, functional, and efficient as well.

Design Your Own Bullfrog Spa Use the online Design Studio tool to choose your spa model, colors, JetPaks, and accessories. You’ll then receive an instant price quote and your local dealer’s contact information.

Bullfrog Spas is a premier brand of personalized premium hot tubs. With proprietary hydromassage technology and an eye for contemporary design, Bullfrog Spas is revolutionizing the concept of the portable hot tub and providing a relaxation experience unlike any other. Discover the award winning spa of the future today.